Platform objects in the ONLP API are represented as handles called Object IDs (OIDs). OIDs have both common and type-specific status, capabilities, and attributes.

You interact with OIDs through two types of APIs – one common to all OIDs and one specific to the type of OID.

Attributes common to all OIDs represent status at a meta level. Is a thing present or missing? Is it operational or has it failed?

Attributes specific to a particular type of OID represent that type’s functionality. You can ask a Fan its current RPM but not an LED.

There are functionality-specific APIs defined for each OID subtype.

Each platform subsystem supports the concept of both hardware and software initialization.

Each platform subsystem has an init routine of the form:

This function will be called prior to any other function in the subsystem. The purpose of this routine is to prepare your module for operation. It must not modify the running hardware in any way. The ONLP libraries are shared amongst multiple processes and can be invoked at any time and should not affect the state of the hardware unless that is the intention of the application.

There is a corresponding denit function of the form:

which will be called at termination.

These initialization functions are optional and need only be implemented if the design of your module requires them. If you do implement them they must return successfully or initialization will abort.

Each platform sybsystem has an init routine of the form:

This function will be called at system boot time to perform any one-time hardware initialization. Just like all other subsystem functions, this will not be called until after the module’s software init function.

Some common operations which may be performed in the Hardware initialization phase might be to set system LEDs to their initial state and bring PHYs and SFPs out of reset.

The flags parameter is designed to indicate whether this is a cold or warm initialization. For example you may not wish to change the state of the SFPs during a warm start in support of ISSU as it would affect the dataplane.

OIDs are just 32 bit integer handles. The most significant byte of the OID encodes the type (SFP, FAN, PSU, etc). The remaining 3 bytes are a unique id referencing a platform-defined object (like Fan 1, Fan 2, Fan 3). The code that defines and manipulates OIDs can be found here

All OIDs have a parent OID. Some OIDs also have one or more child OIDs. This represents their current physical or logical relationship.

For example, a PSU typically has both a Fan and a Thermal sensor built into it. The associated Fan and Thermal sensor for a given PSU are represented as OIDs that are children of the PSU. You can interrogate the Fan OID from the PSU using the normal Fan API, but the Fan itself cannot be accessed if the PSU is not also present.

These parent/child relationships allow the user of the ONLP APIs to enumerate the system topolology as a directed acyclic graph at any given time. OID relationships can change over time – perhaps you remove an existing PSU which contains a temperature sensor and replace it with a PSU that does not.

Here is an example OID inheritance relationship you might find on a normal pizza-box switch: 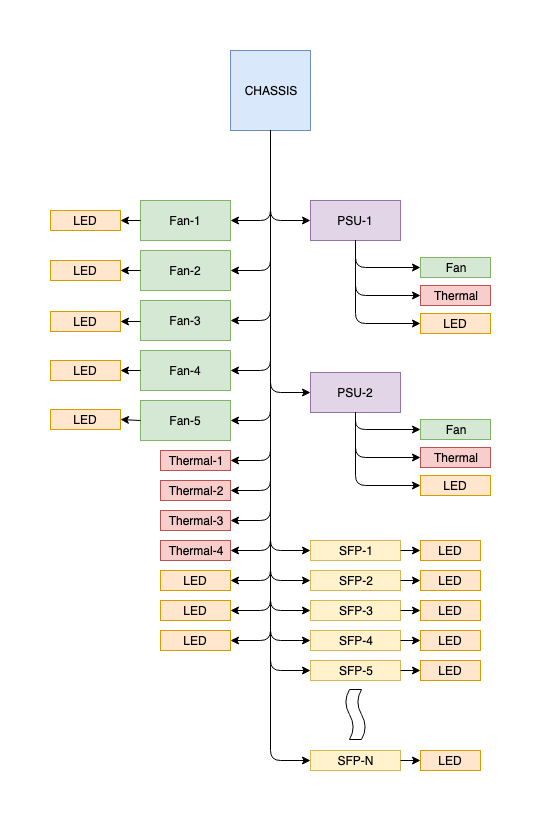 It must be possible to write an application which can operate on any ONLP enabled-hardware, regardless of the number and type of objects present on any given platform.

Applications discover the OID topology by using the API to enumerate some or all of the current OID tree and interact with the discovered objects.

The specific type of each OID (Fan, PSU, etc) is known at the time of discovery (see Representation above) and as such it can be submitted to the type-specific API for further programming.

In general all OID types have the following features exposed by their APIs.

All OIDs support a common OID header structure (onlp_oid_hdr_t) which describes generic attributes for that object, such as:

Every class of OID has an accessor function to query that OID’s header data in the form of:

All OIDs have an information structure that can be queried which provides the current status and capabilities of the object. This structure is defined in the form of:

This structure is queried through an API in the form us:

All OID Information structures can be marshalled to/from JSON, either individually or recursively. All fields are preserved between C and JSON in the transaction.

Information structures are converted to JSON through an API in the form of:

Information structures are populated from JSON through an API in the form of:

The regular JSON structure provides complete fidelity with the the C structure but obviously contains information specific to the APIs.

The User JSON interprets the flags and capabilities and produces a human-readable format that defines what the status of the object is. This representation is used to communicate the status to the user.

While the regular JSON interchange is lossless this version is not.

Getting this representation is done thorough an API in the form of:

There is no from_user_json as the representation is not sufficient to reconstruct the information structure.